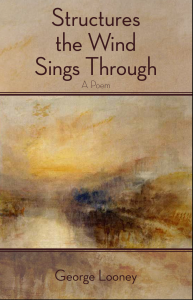 In George Looney’s masterful book-length poem, Structures the Wind Sings Through, a torn-up road under repair provides a starting point for a moving meditation on human loss, music, art, language, and storytelling. This is not a linear narrative but a discursive palimpsest where sparrows become a woman “flagman” or convicts in a half-way house or a fat man listening for a secret message or a Sioux woman humming what might be tribal music or a man who has lost his leg from the knee down. Here is dust rising from the road and constructing itself into the human shape. Here is a book simultaneously novelistic in scope and lyrical in its intensity, containing the many rich pleasures of both.

Couplets and trailer parks, Caravaggio and Hopper, woman and man, the circus and the dance, words and roads, hearts and the feathers of sparrow and wren, barstools, faith, tractors, memory: these are the structures the wind sings through. I love and envy these sentences that bend under the weight of their losses like tightropes. George Looney’s book-length poem—mournful, musical, mysterious—surely earns a place among our era’s most accomplished long poems.

The cantos of George Looney’s latest poetry collection create a world of loss and abandonment. The poetry sings, however, of the sublime discovered in the mundane, and ultimately we find solace in the music of the heart. In the grand “Coda,” the speaker’s lonely, probing, searching voice finally unites with all the preceding cantos’ characters—once mere structures, irreconcilable, now fully human—and in the climax the reader is lifted into this humanity, “and each of us rises / to embrace the man or woman or child / we came with.” Elevating us to its own great height, Structures the Wind Sings Through is a masterwork of thought and feeling and the music of poetry.

“It is not every day that the world arranges itself in a poem,” Wallace Stevens tells us in “Adagia.” What a delight, then, to read Structures the Wind Sings Through, George Looney’s long poem against despair. Here we are the visitors, the ones who will disappear, and so we must attend to the earth while we can. Is it possible to translate such ruin into reconciliation? Yes, this lovely book argues, for “music hums below every surface.”

What can we do with damage, wreckage, loss? Face them, George Looney says. Listen for their weirdly beautiful intonations, and make them into song. What a sweet, intricate, troubling gift this long poem is. It offers us the broken world imaged faithfully, yet transfigured into something new, fresh, and strangely lovely.

Structures the Wind Sings Through is a gentle filigree, spun by George Looney from raindrops and glass dust into an artifact you want to hold to the light for as long as it agrees not to fade. The poem loops back again and again to the notions that vex its maker, but some sorcery makes it feel nearly weightless, something you could pass from hand to hand to study.

—Karen Craigo, author of Someone Could Build Something Here

A mesmerizing meditation on a revolving moment in modern America, this book is a perfectly rendered tunnel through the mountain of human consciousness. Looney scalpels out the residues of myth, ritual, idolatry, and art, wipes clean all traces of atavistic sentiment, scolding us, among other things, for living backwards. These tauntingly calm, chastising couplets both reduce and seduce the reader into near-total obedience. When the poet drops us off, speechless, in the old Eden he has just made new, we are “suddenly almost naked,” rising to our feet, the faith we had mistakenly known as mere breath back in our chests. As after dipping the brain in oceans of Wallace Stevens, it is no surprise to find that in the first few steps, post-Looney, we feel wildly good.